If you want to attain the best potential framerates in-game, you need a powerful CPU. A bottlenecked processor can result in subpar frame rates even with an RTX 3090 GPU.

Most people will encourage you to go with an Intel i5 or i7 processor if you want the best gaming performance. However, if you're just getting started, you can get away with an Intel i3 processor for playing online and many other CPU games.

Even for routine activities like streaming, video calls, and editing, i3 CPUs deliver excellent speed and performance. In other words, if you're looking for the ideal processor for casual gaming, an i3 CPU is a terrific option.

On that note, what is the ideal i3 CPU for your needs? If you want to learn the answer, there's no need to look further. In this article, we'll be discussing the best i3 CPU for gaming.

What Are the Differences Between Intel i3 and Other Intel Core Processors?

Before we get into the best i3 CPU for gaming, it's essential to understand the differences between an i3 processor and its pricier siblings. What makes an i3 different from, let's say, an i7?

The CPU's core is often its most fundamental processing unit. Instructions are sent to the processor, and it conducts calculations or operations in response. Every action you take on your computer is subject to the processing power of your CPU. Having multiple cores can also significantly improve the performance of some programs.

However, there's a catch: in some cases, applications don't fully utilize a CPU's cores. We can better understand this phenomenon by imagining what would happen in a specific scenario.

Suppose you have a quad-core CPU and are running an application that utilizes four cores. On the other hand, another computer executes the identical program with an octa-core processor. The only difference between these two processors is the number of cores. In this case, the performance of both CPUs will be the same. Using more than four cores will not improve speed because the application is designed to use just four cores at a time.

But, is Intel Core i3 good for gaming? How does the number of cores affect performance when playing games?

For one thing, most games only use one or two cores. As such, the number of cores is rarely considered. Multi-core performance will become increasingly important in future games, although it will probably take some time before it becomes the norm. If you're on a tight budget and only intend to use your PC for games or everyday tasks, an i3 can deliver up to 144FPS in nearly every game you'll play.

A CPU's clock speed is the most used metric for measuring its performance. The CPU needs a set amount of clock ticks or cycles to complete every instruction. The number of operations a processor can execute in a second is determined by its CPU speed.

Hertz (abbreviated as Hz) is the unit of measurement used to represent clock speed. At one Hz, that's one instruction per second. The current industry standard for measuring CPU speed is GigaHertz (GHz), equal to 1,000,000,000 Hz. This means that if your CPU clocks at 4.2 GHz, it can perform 4,200,000,000 commands every second. It's worth noting that the slowest i3 processors outperform the base Core i5 and Core i7 chips.

Hyper-Threading Technology, or HT Technology, is the name given to Intel's implementation of Simultaneous Multi-Threading. This is a mechanism wherein a CPU divides its physical cores into virtual cores known as threads. For instance, if you have two cores in your processor, you can get four threads out of it via hyper-threading; and if you have four cores in your processor, you can use eight threads. Core i3 and i7 have it, but the mid-range i5 does not.

A single core of a processor can now handle numerous threads thanks to Hyper-Threading. Additionally, it enhances the overall functionality of threaded applications by increasing processor capacity. Hyper-Threading makes use of areas of the CPU that aren't being used when code is being executed. With an additional CPU register, the processor can function as if it has multiple cores and simultaneously utilizes all the processor's resources. When two cores both have to access the same processor component, one core is forced to wait. Although hyper-threading cannot double a system's performance, having better use of available resources can result in increased capacity for certain critical workload types.

The Best i3 CPUs for Gaming

Some of the best i3 CPUs for gaming are listed below:

Intel Core i3-10100 is currently the best i3 processor for gaming. In general, the Core i3-10100 delivers solid performance for most programs, often rivaling the more powerful Ryzen 5 or Core i5 processors from the previous generation. There are no significant issues with gaming with the Core i3-10100. It's a good choice for gamers. Having the correct graphics card means you can anticipate all games to run at least 60 frames per second.

Comparatively, it can keep up with Core i5 machines from previous generations while outperforming the Core i3-9100F by 10% at 1080p. Although it's not quite as good as the Ryzen 5 3900X, it performs a better job than the Ryzen 9 3600X.

Running 1080p and 1440p resolutions on the same CPU is possible, but high-refresh-rate gaming is out of the question. Also, don't squander your money by purchasing a Z490 motherboard rather than a B460. There won't be much of a difference in performance. Faster memory corresponds to around a 5% improvement in speed, but that's about it.

Intel Core i3-8100 is geared toward gamers on a tight budget. There are cheaper i3 models, but this one packs a lot of punch for the price. Multi-threading is not possible on the i3-8100 because it has only four cores and four threads. However, this is a good option for playing computer games on medium or low settings because it provides high-definition graphics and smooth frame rates.

A game like Grand Theft Auto V can be played at 30 frames per second on its lowest settings with this processor's average clock speed of 3.6 GHz. Overall, we ranked this as one of the best Intel i3 processors for gaming because of its integrated graphics and smooth performance.

One downside of using this CPU is that it needs a Z-series motherboard. If you plan on upgrading to an 8700K in the future, then this motherboard would be a good option for you. Meanwhile, most gamers will have to buy a Z370 motherboard with the i3-8100 (which is pricey even with the lowest model) until more budget-friendly motherboard versions are released.

Despite this, the Intel Core i3-9100F proves to be a capable processor in its own right. You might think that a quad-core CPU would be insufficient these days, but you'll be very impressed by a speedy and competent system. Even though this CPU has only four cores, it performs better than a few more costly counterparts in light of moderately threaded tasks because of its high base clock speeds.

The main question now is whether or not the Intel Core i3 processor is capable of running games. Because it achieved decent gaming scores in multiple benchmarks, the answer to that is yes. In addition, it's able to run most modern games at an acceptable frame rate. Even the most resource-intensive games can be played at 30+ frames per second. 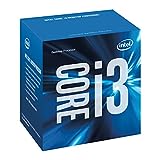 The Intel Core i3-6100 is a dual-core CPU that features Intel's Hyper-Threading technology, significantly improving multi-threaded performance. It's an excellent CPU for gamers who don't want to spend a lot of money on a quad-core processor to reach 3.70 GHz performance.

Compared to earlier-generation processors, the production process has been improved from 20 nm to 14 nm, which is among the key advantages that i3-6100 offers. Also included is a change to the CPU's silicon, which improves performance while lowering the CPU's electricity consumption.

Aside from the fact that the i3-6100 has only two cores, the most apparent disadvantage is that it lacks Turbo Boost. This is a problem since the processor's core cannot be cranked up to a faster speed.

For all intents and purposes, the Core i3-6100 is much more of an office workhorse than a gaming powerhouse. If you want to test its capabilities, keep the parameters as low as possible to avoid any freezing. However, if you're just going to play classics like League of Legends, DotA 2, CSGO, or games from the 2000s, then this should work fine. There's even hyper-threading to keep things running smoothly while simultaneously using other apps like Powerpoint or an online streaming app. 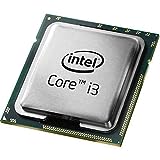 The Intel Core i3-7350K is capable of overclocking to 4.20 GHz, multi-threading, and playing contemporary games at least on medium settings. From 91W on a typical desktop to 4.5W on a mobile processor, Intel's 7th Gen of CPUs uses the same fundamental technology but different processors and integrated graphics combinations. Among the 7th Generation Core i3 processors, the Core i3-7350K stands out. It's the only CPU with a 60W thermal design point in the same price range as the Core i5-7400. Having a clock speed of 4.20 GHz makes this core more attractive. However, the processor lacks a turbo mode.

Alternatively, the CPU can operate in a low-power mode at 800 MHz when idle or at full throttle when actively used. If peak output is your primary concern, this is a better option than turbo mode, especially if you're running Windows 10 and using Intel's SpeedShift technology. Core i3-7350K also has enhanced encode and decode capabilities from Intel HD Graphics 630.

The lack of a heat sink is a critical weakness in the processor. Overclocking without a huge cooler is possible, but the cost of even the simplest cooling system can be expensive. If you want to use its unlocked multiplier, you'll need a motherboard from the Z-series, which is more costly. With all these extras, the Core i5s appear to be more affordable.

The Intel Core i3-7350K is the company's first unlocked budget CPU. Even though it is slightly pricier for a Core i3 processor, it provides incredible overclocking capabilities for gamers and a remarkable 4.20 GHz maximum speed. Intel combines basic Core i3 capabilities with the CPU's excellent overclocking features to provide gamers with an affordable, powerful processor ideal for any casual gaming PC.

Although Core i3 processors aren't as powerful as their more expensive counterparts, they still have a lot to offer in terms of gaming. Some limitations will be present, such as potential lagging and a lack of three-digit FPS. On the other hand, Core i3 models from the last few years typically deliver more than adequate gaming performance.

It can be challenging to find a gaming CPU that's both affordable and powerful at the same time. In this article, we've answered the question of “is i3 good for gaming?” and rounded up some of the best i3 core processors on the market. With this information, we hope that you'll be able to make an informed choice.

This product was presentation was made with AAWP plugin.